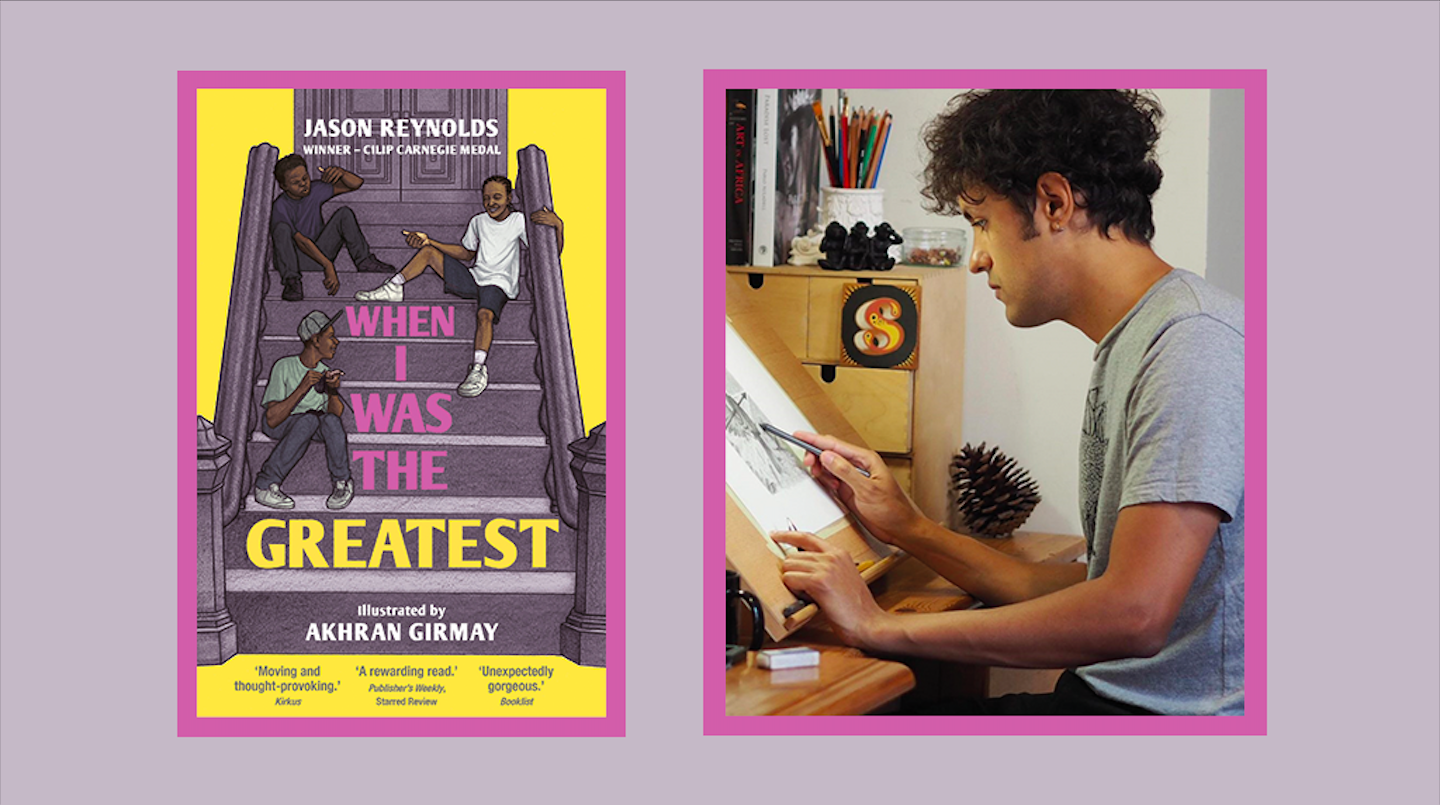 Q: Can you tell us a bit about the process behind illustrating Jason Reynolds’ bestselling novel When I Was the Greatest?
A: It begins with me dropping any and all initial ideas for character design and other relevant visual details on paper. To then bolster the envisioned imagery, I begin to scour the internet collecting any reference images and photos, that I will later rely on to help depict the environment and the central characters. But I also explored ways of researching through much more recreational methods too at times. Since the story is set in Brooklyn, New York’s Bed-Stuy neighbourhood, I chose to look for reference material as well as take inspiration for tone, from films and TV series such as Spike Lee’s Do The Right Thing, and Chris Rock’s Everybody Hates Chris.

Q: At what point did you discover your love for drawing and illustration?
A: I’ve always been aware of the joy, sense of achievement and satisfaction that drawing gave me. I suppose that it was most acutely recognised within myself as I approached my teen years when anything from doodling to more committed forms of art really took me away from the sometimes awkward and turbulent times that I was experiencing then. Retrospectively, I think that point helped to highlight to me that illustration (before I knew that was the thing you called it) was really a coping mechanism during that strange period. It still almost serves as a way of dealing with emotions, but now I feel like it does more – it has strengthened into a sense of purpose.

Q: You’ve now worked on illustrated editions of a few stand-out books including All American Boys and When I Was the Greatest, what bestselling book would you love to illustrate next?
A: This is a hard question to answer without feeling like my final answer will only come after I’ve responded! But I’d certainly really love to illustrate something like Lian Hearn’s medieval Japan-inspired fantasy series, Tales of the Otori. I really enjoyed the warring world introduced in Across the Nightingale Floor. It was so vividly described and I feel like I’d have a really good time portraying assassins, samurai and geishas.

Q: What is your favourite thing about illustrating books for teenage readers?
A: I believe the main and best thing about creating imagery for teen readers is knowing that they are on the cusp of adulthood, so the grittier and more sophisticated themes are invited into the artwork. Yet they still have a foot in childhood, and so I feel like there still remains a special place in their hearts for pictures and certain aesthetics. Knowing this helps motivate my creative impulse to create a sense of drama in an illustration, as I feel assured that the younger reader will absorb it with more attention and curiosity.

Q: What scene did you enjoy illustrating the most for When I Was the Greatest?
A: I think for me, if it were a question of which one got the most reaction out of me during creation, it would be harder to identify which one I was most emotionally invested in. I mention this because if something conjures up a feeling, then I intrinsically have something deeper to work with and thus have a better time making it. But since we’re talking about which one I enjoyed the most, I think I can narrow it down to three that I felt the most enjoyment from. First was the barber scene, which I liked doing because as seen in various films like Pixar’s Soul and entertainment examples, it is a location that is appreciated almost like a cornerstone of Black culture and a home for social interactions. Although I couldn’t show all that, it was still good to have that knowledge as fuel in my mind whilst drawing. Second is the image of Ali getting his hair re-plaited by his younger sister Jazz, just in time for the party. As Ama Badu rightly pointed out for me in the initial brief, this is another widely cherished kind of moment amongst members of the Black community. It radiates warmth, togetherness and social intimacy, on top of signifying the process towards an important expression of identity.  Lastly, the scene where Ali is lying in bed, injured from the night before and looking up at the ceiling (but also sort of at the reader). I just had fun drawing this image and staging it. Sorry for not being decisive and choosing one!

Q: If you were stranded on a desert island, what book would you have with you?
A: Well I recently got around to reading Lord of the Flies for the first time in my life, and I can say that I was hooked to its disturbingly compelling narrative. That would be an interesting choice to hunker down with; an abundance of tips on what should and shouldn’t be done in that scenario. But I reckon I’d really want and need something to take my mind off the fact that I’ll probably never leave said desert island. Something that I remember enjoying on a beach was Stephen Fry’s Mythos, which I read whilst on a Greek island. I’d need its almost standalone tales to dip in and out of and come back to in order to break up my time being completely alone.

Find out more about When I was the Greatest, here.