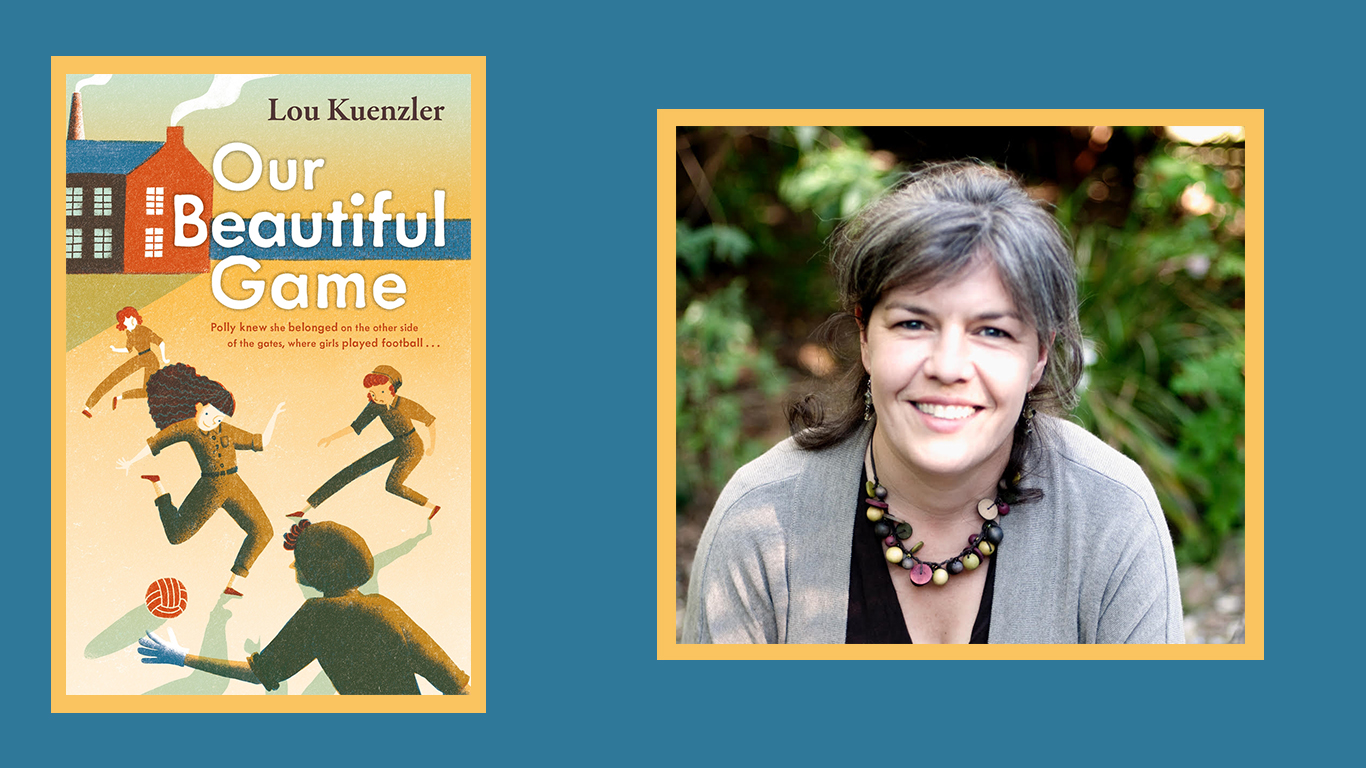 Q: What is Our Beautiful Game about?

A: It is a middle-grade historical adventure, set in Lancashire during World War One and centred around a young, football-mad girl named Polly Nabb. With her eldest brother off at war, Polly’s mam wants her to stay at home, look after her younger siblings and do the laundry. Polly has other ideas. At just twelve years old, she gets a job in a munitions factory and is soon playing football with the other young women and girls who work there. When the factory squad form a proper team, it seems like a dream come true. But whilst Polly and her teammates play their hearts out – and bravely defend the Home Front too – not everyone is happy to see female players on the pitch . . .

Q: What was the inspiration behind this story?

A: Although my character Polly is fictional, she is closely based on real young players at the time, such as the legendary Lily Parr and Alice Woods. Dark and anxious as the war years were, they also offered incredible new freedoms to women and girls. Football became hugely popular amongst female players, especially in the munitions factories. These often very young working class girls might previously have been sent into service. Shut away in private houses, they would have been given very little free time and, what recreation they did have, would rarely have been shared with others. Suddenly, huge groups of women and girls were able to gather together in factory forecourts and take a break. Best of all, they were wearing trousers – no wonder the game took off!

The spark of excitement at this moment in history was irresistible to me. I knew contemporary middle grade readers would identify with these trailblazing young players attempting to break down boundaries and rewrite the rule book; not only in the game they played, but also in class and race, who they were allowed to love, where they worked and how they were treated. Again and again in my research, I found feisty tales of fabulous feminism . . . I knew the story had to be told!

Q: Why is 2021 a significant year for women’s football?

A: Although the women’s game was initially viewed as a bit of a joke: a wartime chance for everyone to let off steam and raise much-needed money for wounded soldiers (whilst the girls showed their knees!), its ever growing popularity became impossible to ignore. By the time the men began to return home in 1918, women’s teams were firmly established up and down the country. A match played by the famous Dick Kerr Ladies team on Boxing Day 1920, drew a crowd of 53,000, with many others locked outside unable to get into the sold-out stadium. It also raised a whopping £3,115 for charity (well over £145,000 in today’s money). This was the problem!

The Football Association perceived a threat to the men’s game – with women’s matches sometimes better attended than their male counterparts in those early post-war years. In December 1921, the exclusively male FA took decisive action. They outlawed all female teams from playing on any FA pitches and from using FA officials to oversee their play. Instantly, the high profile women’s game was cut off at the roots. Women’s matches were reduced to being played on tiny local pitches, or waste grounds, with no room for spectators. The bitter and punitive ban was not lifted by the FA until fifty years later, in 1971.

Thank goodness, a hundred years on, we are once again celebrating the unstoppable passion for the women’s game; not only with international teams like the Lionesses, but in towns, cities, schools and local communities everywhere.

Q: If Polly was watching Euro 2020, who do you think would be her favourite player?

A: I think it would have to be Jack Grealish because he is so sharp, speedy and technically brilliant. He can outwit anyone and you never know what he’s going to do next – a bit like Polly herself. She’d also definitely be up on her feet and cheering for Raheem Sterling every time he scores!

Q: What is your favourite thing about being an author?

A: Make-believe! Ever since I was tiny, my favourite thing was to play imaginary games, dress-up, talk to myself and pretend to be something or somebody else. Now I get to imagine plots, worlds and people for a job. Almost unbelievable!

Q: If you were stranded on a desert island, which book would you have with you?

A: Gosh! I think it would have to be Grimm Tales For Young And Old by Philip Pullman. I love fairy tales and would find endless inspiration in these magical, tense and humorous retellings. Mind you, if nobody was looking, I might try to sneak the recent gorgeous Faber edition of Gender Swapped Fairy Tales by Karrie Fransman & Jonathan Plackett onto the raft too! The combination of these two titles would keep me happy for months . . . maybe I wouldn’t even want to come home (as long as there was Earl Grey tea and digestive biscuits on the island too!).

Find out more about Our Beautiful Game and read an extract here.